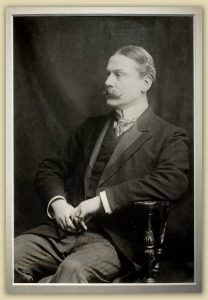 During his childhood, Maartens spent a period of almost seven years (1864 – 1871) in London, where his father (born Solomon Schwartz in 1817 in the Prussian-Polish town of Meseritz in 1817) was originally destined to become a rabbi. However, he converted to Christianity and was rebaptised as August Ferdinand Carl Schwartz. He became a minister, with the special task of carrying out missionary work among the urban Jews of Europe. He started his work in Constantinople, moving on to Budapest and Berlin and ending his career in London. Schwartz had previously carried out a similar task (from 1849 to 1864) among the Jewish population of Amsterdam. Shortly after his arrival in Amsterdam, Carl Schwartz married Cornelia van Vollenhoven (1822-1902), a descendant of a prominent Amsterdam family. Following his father’s death in 1870, Joost Schwartz went to grammar school first in Amsterdam and later in Bonn, where he obtained his school certificate. In 1877, he started studying law in Utrecht, where he obtained his doctorate in 1882. Shortly afterwards, he took over the lectures of his master, Prof. J. A. Fruin, for a while.

After his marriage to his cousin Anna van Vollenhoven, which was conducted by Nicolaas Beets in St Peter’s Church in Utrecht, in 1883, he had no job and travelled around a lot. But from the beginning of the twentieth century until his death, he lived in the house he helped design himself, De Zonheuvel, halfway between Maarn and Doorn, which is known today as the Maarten Maartens House.

On the death of her parents, daughter Ada van der Poorten Schwartz turned the Maarten Maartens House into a centre for Dutch and international youth work.

Maartens made his debut in 1885 under his own name with an anthology of conventional poems written in English, The Morning of a Love and other poems, which was followed by two poetic dramas. He had more success, particularly in America, England and Germany, with his novels that were written in English but situated in the Netherlands, such as The Sin of Joost Avelingh (2 parts, 1889) and God’s Fool (1892), translated into Dutch in 1896 under the title of Gods gunsteling. In the latter story, the protagonist had a childhood accident that left him deaf and blind. He is the heir to a big company, and is unjustly accused of murdering one of his two half-brothers, who is running the company in his name.

As Maartens had all his work published in English by English publishers and kept well away from any literary circles in the Netherlands, his work never gained the recognition it deserved in the Netherlands. One year before his death, his only   book of poetry originally written in Dutch, Gedichten (1914), was published under the pseudonym Joan van den Heuvel.

You can find an overview of all his works here.